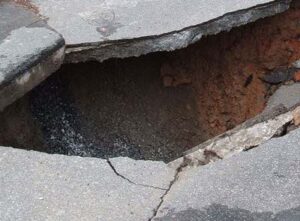 On Monday, October 5th, one of the busiest roads in Miami was reopened, about eight hours after a sinkhole opened and caused major traffic delays, making the evening commute, increasingly difficult.

The 4-by-4-foot sinkhole appeared between Southwest Sixth Street and 27th Avenue at about 2 p.m. in Miami. The 4-by-4 opening was found in the middle of the southbound lanes.

The closed roads made it especially difficult for Miami residents to reach their destinations during rush hour commutes.

As a result of the sinkhole appearance, Miami Police and Fire Rescue decided to shut down 27th Avenue southbound between Sixth and Seventh Street. During this time, crews focused on a 10-by-10 foot section underneath the road, which was not visible from the surface. When the sinkhole was found, the ground appeared to have been eaten away by the water or something that might have resulted in this area below the surface to grow.

In order to fix the damage, Miami-Dade Water and Sewage crews dug up a lot of 27th Avenue southbound and were then able to open up the hole a little, with the help of the construction equipment.

The hole became so deep that two men were able to fit inside to repair the leak.

Officials say that the hole was caused by a water main break and they showed concern that other areas may cave in, as a result they decided to shut off the water in the area.

After countless hours of work, crews finally finished closing the hole at about 10 p.m. and all roads on Southwest 27th Avenue were reopened. By this point, the task took all day to complete and caused major traffic delays to Miami residents commuting and using this important road, however, this was a necessary measure to take under the circumstances.

Dealing With Hail or Wind Damage