Marie Roseme, who has been living in the Woodlands Country Club for four years and the City of Tamarac for 11, is a home healthcare nurse and single mother of three boys. She also has her hands full with her youngest child in a special needs program for children with autism. After months of living with an unsightly blue tarp on her home, she was able to publicly thank the people who made it possible for her to have a brand new roof over her head.

Last spring, she came home from work to find water all over her house from a roof leak. The next day, she called her insurance company but they denied her claim. She then had no choice but to put a blue tarp over her house. After some time, the Section Two association had to report her to the City of Tamarac.

She showed the inspector at the City how bad the problems were, and how water was gushing into her home when it rained. Unfortunately, she was too high up on the list to receive any kind of help through a grant but fortunately, the City gave her information on The Florida PACE Funding Agency Program and did not fine her once she started working with them. Needless to say, she was happy with the immediate response she received from PACE.

A press conference was held in front of Marie’s home on Tuesday with the following in attendance: Senator Jeff Clemens, VP FAIR, Energy & Wind Mitigation Programs, Tamarac Mayor Harry Dressler, Vice Mayor Pamela Bushnell, Commissioner Michelle Gomez and Executive Director of the Tamarac Chamber of Commerce Peter Mason. Marie was happy with her contractor, J & M Contractors of South Florida, that was recommended to her.

Florida PACE funding finances certain types of qualifying projects such as energy efficient, wind mitigation, and solar improvements. The Florida PACE Funding Agency is a local government formed in 2011 as a public service to Florida cities and counties. Tamarac, Pompano Beach and Pembroke Pines are currently the only Broward County cities that have the program available

PACE Funding is statutorily enabled and allows property owners to obtain financing that is not based on their credit scores, but based on the value of their property. It can be 100% financed without any out of pocket costs. To qualify, the homeowner cannot have any missed or late tax payments in the last three years, must be current on mortgage payments, and they cannot be in foreclosure or have any bankruptcies in the last three years. Additionally, improvements can also be paid by cash or credit card as well a bank financing. 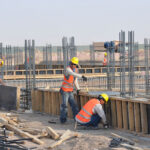 The Mineo Salcedo Law Firm is Proud to Welcome Alexander J. Santana to its Team