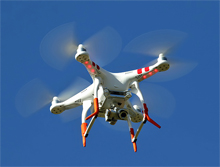 The Consumer Electronics Association is estimating that consumer drone purchases will have a 50% increase in sales this year, meaning there will be an additional 300,000 drones in the skies.

The uses of drones are becoming increasingly common. These remote controlled aerial drones come equipped with onboard cameras and they can be purchased online for as little as $1,000.

While the Federal Aviation Administration considers the threat that civilian drones can pose to commercial and private aircraft, the insurance industry is assessing their potential impact on home insurance.

Let’s say a drone crashes on a neighbor’s car, takes photos of children at play or adults at leisure in backyards without permission, or – even crash and causes bodily injury to a neighbor or pet. Would home insurance cover the damage caused by the drone’s operator?

“The standard homeowners’ policy provides coverage for damages the insured becomes legally obligated to pay because of bodily injury or property damage arising from an occurrence to which the policy applies,” says attorneys Tom Schrimpf and Russ Klingaman in Claims Journal. “Absent extenuating circumstances, there is no doubt this broad grant of coverage initially extends insurance for liability arising from recreational (drone) operations. However, this broad coverage may, of course, be limited by policy exclusions.”

Most policies do exclude coverage for injuries or damage caused by the use, maintenance or, ownership of “aircraft.” However, most are not placing drone use in the category of “aircraft” because they are not designed to transport cargo or humans.

Property insurance coverage for the use of drones is not a given.

Typically, claims which result from the business use of a drone are not covered. Say for example taking aerial photos for real estate listings

If you own a drone, look closely at the language in your policy for commercial-usage of an “aircraft” and the intentional-acts exclusion before you start operating your drone.

Currently the Federal Aviation Administration has FAA has given the approval for home insurers to use drones for surveys, underwriting, risk assessment and documenting claims damage from natural disasters.

Beyond Katrina: Lessons in Mitigation, Insurance and Community