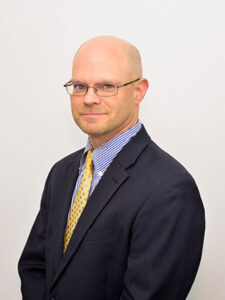 Garrett S. Elsinger earned his undergraduate degree in Political Science and History from Hope College, Holland Michigan in 1993. He earned his Juris Doctor from University of Miami School of Law in 1996. Garrett worked for the Broward County State Attorney’s Office from 1997 through 2003 where he rose to the position of Felony Trial Unit Supervisor and was responsible for the prosecution of vehicular homicide and second degree murder cases. He has been lead counsel in over 100 jury trials in both state and federal courts.  In 2003, Garrett opened his own law firm in Fort Lauderdale where he practiced criminal law. From 2008 through 2014 Garrett worked for Purdy, Jolly, Giuffreda & Barranco, P.A. where he practiced civil rights defense and government liability representing law enforcement officers in state and federal courts who were accused of false arrest, excessive force, and negligence. Garrett focuses his practice in the areas of homeowners’ first-party property insurance litigation and general civil litigation. He is admitted to practice in all Florida state courts and well as the federal courts for the southern and middle districts of Florida, the Eleventh Circuit Court of Appeals and the United States Supreme Court.