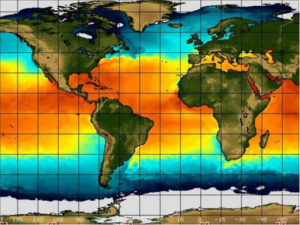 On Wednesday morning, NOAA released its data for the Pacific Ocean temperatures for the week of November 9. We hit a record — the current El Niño is the strongest in recorded history.

Before 2015, the largest recorded weekly reading of El Niño occurred during the week of November 26 in 1997. We passed that milestone last week. In 1997, the El Niño index set a record of 2.8: As of last week the Pacific Ocean in region 3.4 (where El Niño is measured) hit a record of 3.0: So another weather record has been set. What does it mean? In the very short term it means that there will be some hellacious weather in the US Pacific West/Texas in the next 90 days. It also means there will be a drought in Australia and Indonesia. Other parts of the globe will feel the consequences of the mega Niño.

Another consequence of this year’s El Niño, however, is virtually a sure thing to happen within the next half year. A very rapid change in El Niño water temperatures will follow — in nine months we will have gone 180 degrees in the opposite direction and we will be dealing with a very strong La Niña.

The following plots the changes from El Niño (red) to La Niña (blue). Note the rapid change that occurred from November 1997 to the fall of 1998. A very big La Niña followed the record El Niño:

This chart from Wednesday’s NOAA report is a synopsis of the computer forecasts for the collapsing El Niño and soon-to-be La Niña: What will the coming La Niña bring us? If history is the gauge, then we should be preparing for a record hurricane season in the summer and fall of 2016 and a return to the crushing droughts in the Pacific West. This is what NOAA reports for the hurricane season of 1998: In March of this year, the Australian Meteorology department issued its first warning that a big El Niño was in our future. I wrote about it, and in the blog I made some predictions of what it meant. Many of those things have now proved correct. So I’ll go out on a limb with some deep thoughts on the coming La Niña:

— If you live anywhere along the US coast from Virginia all the way to Texas (especially Florida), make some preparations.

— If you’re thinking of putting your house up on stilts to avoid flood damage, do it now. By March, the “Coming La Niña story will be in the media — too late to hire the construction crews to raise the house.

— To the extent possible, increase flood and wind insurance protection.

— Short the stocks of those insurance companies that have large risk exposure to the US east coast.

— If you’re thinking of buying that dream house on the ocean in the Sunbelt, wait a year — there will be some bargains. If you’re a seller, call the broker soon …

The La Niña will result in a resumption of drought conditions in the West. So consider:

— Enjoy the West Coast skiing this year — the next two years will suck.

— Don’t buy a vegetable farm (or heaven forbid a grape grower) in California just yet.

— Pot growers in California (huge biz) will get squeezed, as these growers use a ton of water.

I wonder about Phoenix and Las Vegas (more than San Francisco or Los Angeles). These cities are highly dependent on the Colorado River/Lake Mead. In a year the headline will be “Drought Returns — Lake Mead Level Resumes Drop.” What might be the implications of that? I can’t think of anything to be “long” of in that scenario — including casinos …