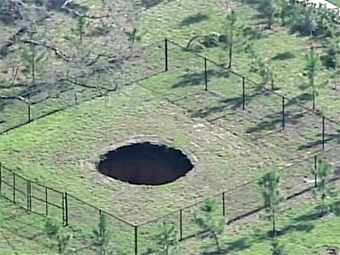 Just last month, Hillsborough County gave two Valirco families three minutes to get out of their homes. This is shortly, after a 6- foot deep sinkhole opened between their homes.

The sinkhole is between property line 4724 and 4726 Copper Canyon Blvd. A local news station discovered the homeowners of 4724 Canyon filed a claim with their insurance company in connection with significant cracks in January. State Farm investigated by hiring an engineering firm which documented cracks and found sinkhole activity under the home. However, State Farm denied the homeowner’s claim to stabilize the house. “They told them, ‘Oh, you’re fine, and now, eight months later, we know what the definition of fine is,” said Chris Codling, an attorney representing that homeowner, Santiago Trujillo.

Now geologists and engineers from both homeowners’ insurance companies are investigating the damage by using ground penetrating radar to determine the activity is going on beneath their homes.

However, the homeowners remain are worried about what will happen to their personal belonging and homes, questioning why State Farm didn’t take the proper steps to stop this from happening.

Codling explained that Florida laws changed in 2011 that now allow insurance companies to deny sinkhole claims if they determine the sinkhole activity has not caused structural damage.

Codling says his clients maintained that the cracks were structural damage, and initially worried about a sinkhole opening under the house since they first reported their claim. Nonetheless, State Farm stated that the structure was intact.

State Farm is now forced to fix both properties, including the home next door that belongs to 80-year-old Yolanda Altreche and her husband. They got out with only the clothes on their backs and are terrified.

Why Home Inventories Can Help With Your Claim Settlement